Well, we have finally connected back with the computer world after a few weeks of no internet and now it's time to do some major catching up! We are alive and doing well!
Before we left for the big move back to Wyoming, we were able to spend some fun times with friends the last few days we were in Nebraska. The week before we left, our friends, the Larington's, threw us a little going away party with some of our closests friends. We enjoyed some yummy finger foods and cake, visiting and the kids playing. 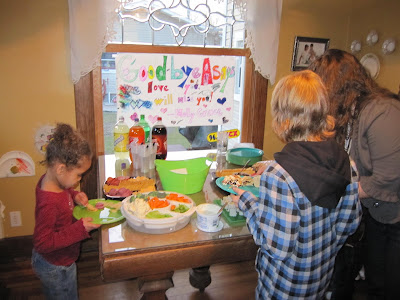 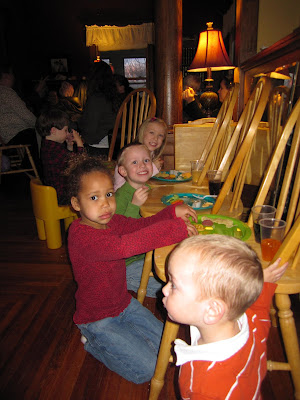 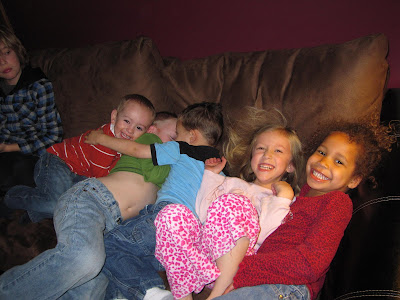 A few days later, my good friend Sherry H., had playgroup at her house so the kids could all play together for one last time. They got to make fun pizzas out of tortilla shells and then played. I'm going to really miss our playgroups! We had such a great group of kids and moms! You guys are the best!! Do you think you can come to Wyoming for a playgroup?! :) 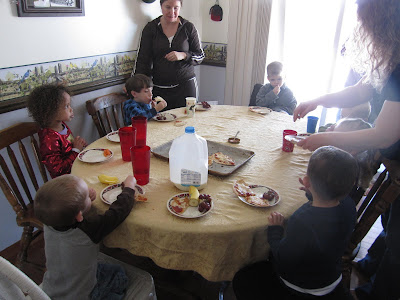 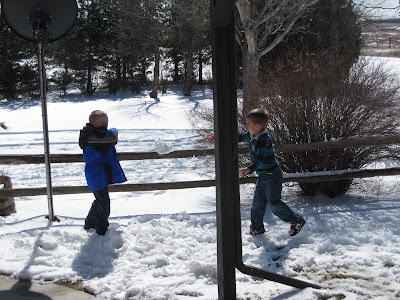 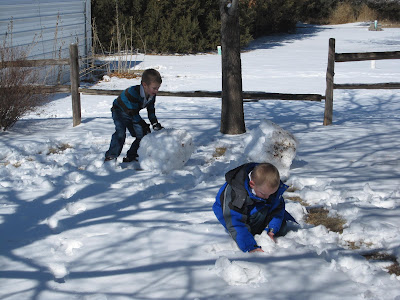 Wednesday, March 9, my mom and sister both flew in to help in getting us all boxed up and my house cleaned. They were so much help! My sister's birthday was the 10th and our great friends, the Blomstedts, had us over for dinner and we celebrated her birthday with them. 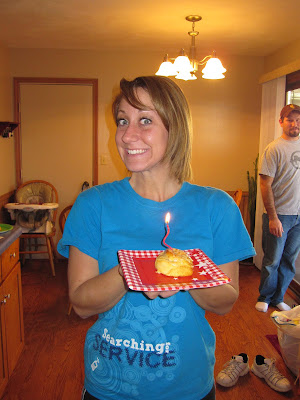 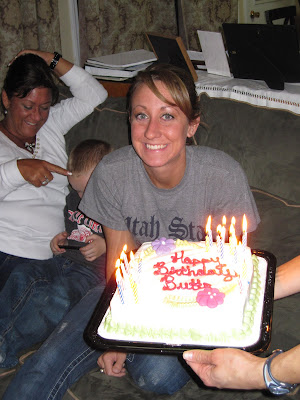 Friday (March 11), we loaded up our uhaul. We had GREAT help from the people in our branch. There were a total of 44 people at our house that night to help (like most of our branch)! We had the truck loaded (with NO room to spare) in under an hour and then enjoyed some pizza! Thanks so much to all those who came to help us! That night we spent the night at a hotel in town since all our stuff was packed and the house cleaned. 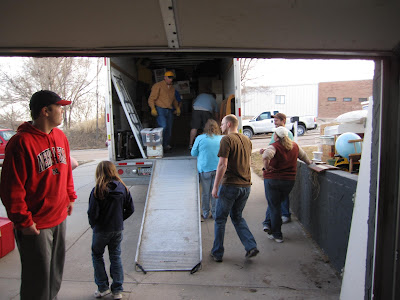 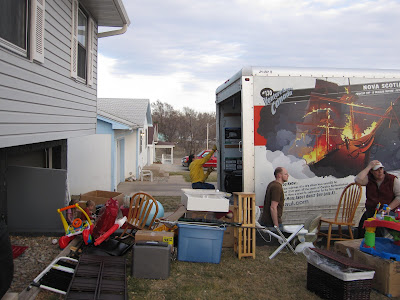 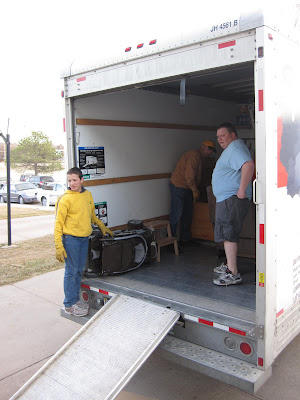 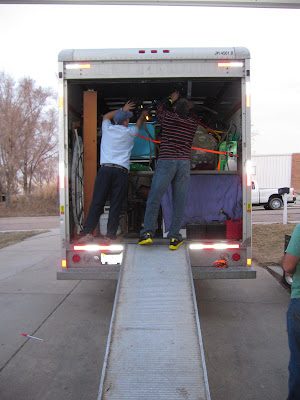 Throwing in the last few things. When we pulled up to the house with the Uhaul, I though we were going to have a TON of room! Boy were we wrong! we were full to the brim in our uhaul and in both the cars we drove...it was crazy!! 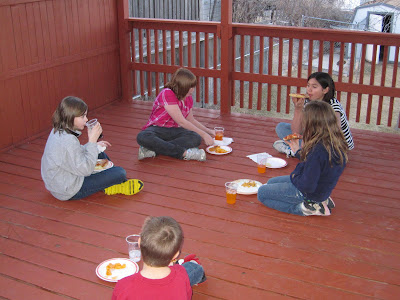 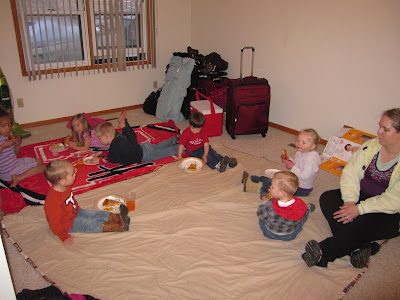 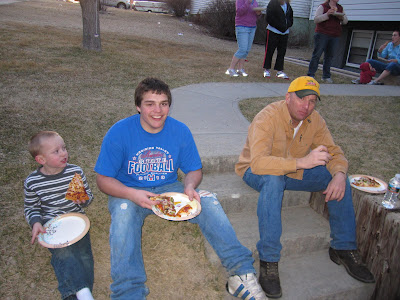 Carson enjoying some pizza with one of his (and Travis') favorite poeple, Rulon! He's like 12 years older than Carson but doesn't care one bit! He makes Carson feel like he's so cool and is a great example to my boys! He will be greatly missed by my two boys! 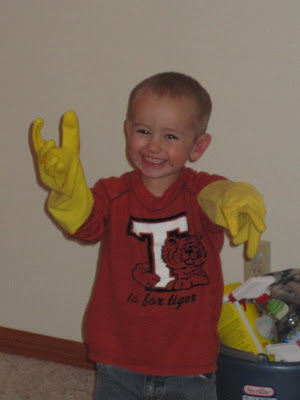 Saturday morning, we left McCook about 8:30 and made our way to Wyoming! It was the LONGEST trip of my life...15 hours from start to finish! Sunday, we unloaded all our belongings and then loaded up the uhaul with what was left in the house of Christian's grandma's and took it to her house in town. Lucky for us, all of Christian's brothers (well, minus Jared who is on a mission) were home for Spring break the week we moved back so they were all available to help up get stuff moved in! Thanks, guys, for all your muscles! 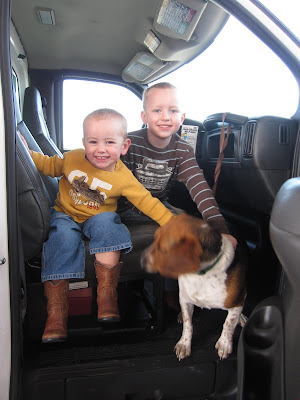 Yes, even Opie made the trip with us. We had decided that if there was room to take him in the back of the truck, he would get to go. Well, as you can see, we were pretty loaded, so he got the V.I.P seat in the front with Christian. And, much to our surprise, he has stuck around really well at the house. He has staked his claim around the house and runs off other dogs that come around.
The unloading process! 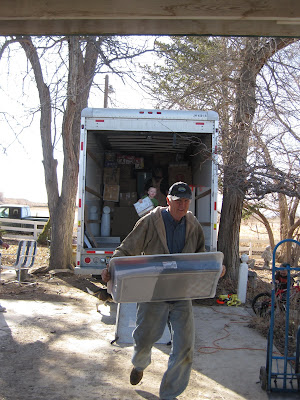 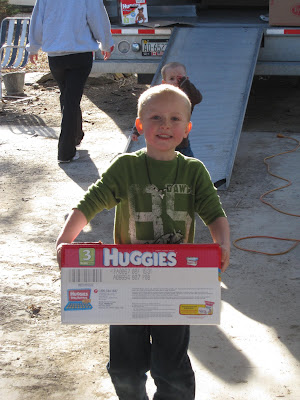 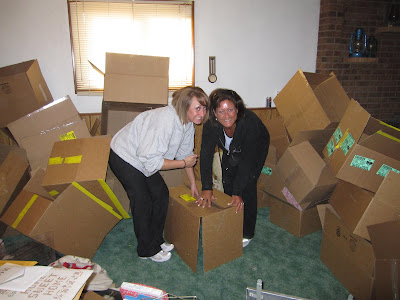 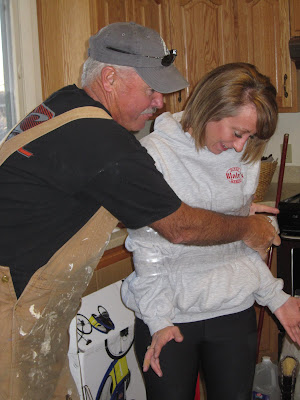 We had a roll of tape that didn't have any stick on it, so instead of letting it go to waste, my dad decided that we should use the entire roll around my sister. 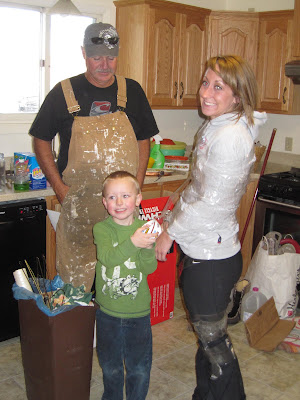 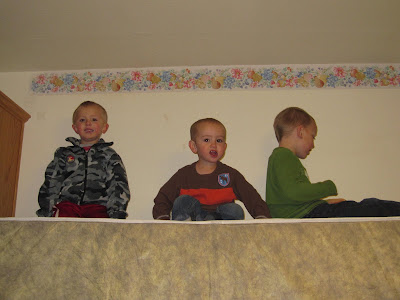 Carson and Travis hanging out with their cousin, Stetson on top of our matresses.
This is what our boys did a lot of the first week we were in Wyoming. We were all busy cleaning/painting, so they got to watch a lot of movies. 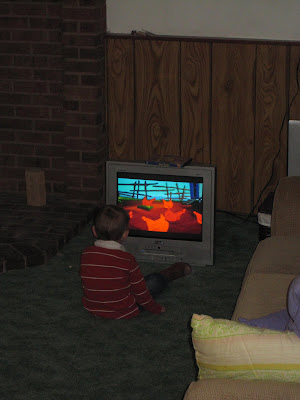 We are just about all settled in now. We spent the first week in Powell at my parent's house while we worked on cleaning all the carpets and painting about half the house. After that was done, we started moving things into rooms. I think I have like 12 boxes that aren't unpacked yet and that's because most of them are boxes of things that need to be stored in a garage or shed. The boys have adjusted really well and are LOVING the fact that they have gotten to see some sort of family every day since we have been here. They love to play outside in the trees and yard and look forward to every night when grandpa and grandma Asay or Jacob come and get them to check cows, and playing with their cousins. We were able to enroll Carson in a preschool in town and seems to really like it! He has made some new friends already, but still says he misses his friends from his other school. Travis has been doing great. It's been so nice to have my mom come during the day and help put stuff away so he can hang out with her too while Carson is at school. We are working on no pull-ups at night and so far, we have only had one accident this week! We have gone to story time once since we've been here and are looking forward to more of them. He went to nursery like it was noting new, which I worried about because we just got him to go to nursery by himself not too long ago in McCook. He had no problems with it knowing that his cousin, Kandace was there with him!
Christian seems to be liking his new job. It's been kind of an adjustment going from a higher paced area in Nebraska to Wyoming, but he's really motivated and has a good attitude about it. I think he will be a great assest to their company and could really help them grow!

I was so excited to see Carson at preschool. It will be fun to have him in Jacob's class.

So glad to see you guys are all moved in and settling down. That's great that Carson is in preschool. Kind of jealous you guys are back around family. Can't wait till this summer.

So happy you are getting settled in...I can't wait to come home and have you guys there!! YAHOO!!

It is so great to have you back in the blog world. We love your updates as that is how we see your family now. We are glad that everything is getting settled and especially that the boys are adjusting well. We miss you around here so keep up those updates so we at least can watch all the happenings of the Asay's!

I am glad you made it!! How nice for your families to have you back. Enjoy!!

Moving really sucks!! Although, we remember well the last time we helped you move from Laramie...it appears you have a lot more stuff now. We also remember enjoying pizza...hope you are settling in nicely.