The day before we left to come home from Cali, Christian left for a week long fishing trip to Canada with a seed/chemical company that he works with. He had to leave Lovell by 3 a.m. In order to make it to Billings by five where he met up with the other guys. They drove 880 miles to Reindeer lake where they fished for three days and then had to drive back 880 miles. Christian said that the last 130 miles of the trip into the lake were on a dirt road. Once they made it to the lake, they were met by the guides with a boat who took them by boat to their cabins. Each day there at 7:30 they had nice big breakfasts in the lodge. At eight, they would head out and fish until noon, when they would pull up to shore and eat what they had caught that morning. One afternoon for lunch, they got to have some caribou for lunch. After lunch, they would fish until five and then head back to the lodge for dinner and then would hang out with the group. It sounded like an amazing trip and the fish they caught were huge! Christian had fun and hopes to be able to take the boys somewhere similar when they are older.

Our last full day in Cali, we spent mostly at the beach. We went back to the same one and had some more fun. This day, the seaweed was everywhere along the beach. After the beach, and after we were ready, we went to a little shopping area to get some plane treats and had some dinner. 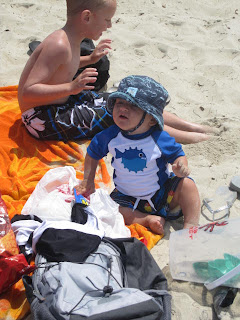 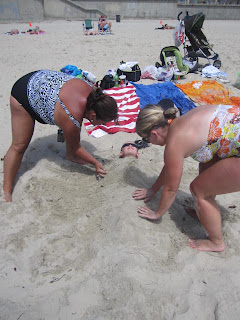 The day we left, we decided to go shopping for a bit and then drove up to the San Diego Temple. We had seen it from the freeway a couple of times and wanted to go and see it. This is the place I always wanted to get married when I was a little girl. To me, it looked like a castle! It's a beautiful temple and we enjoyed walking around it. 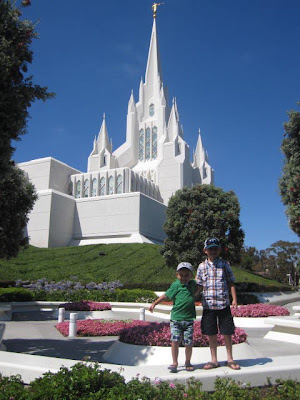 We got home to Cody around 11:30, so the boys and I decided to just stay at my mom's since Christian was out of town anyways. We had such a fun trip and I'm so thankful to my mom and sister for all their help with my kids...they were the best! I'm sure the boys will always remember this trip!!

Sea World and the bathroom fiasco!

When we decided to go to San Diego, we were trying to decide what "thing" to do. There was Disney Land, Knott's Berry Farm, Sea World, the zoo, a Safari Park, and I'm sure there are tons more we don't know about. We decided that it would be fun to do Sea World. It had been many years since my mom went and a seagull pooped on her mom's hair, and we had never been, so we thought it was a great idea. We got to the park around 10 and walked through all the exhibits and watched the Shamu (or shampoo as Grandpa Foulger was trying to convince them his name was) show. I thought there was going to be more animals than there was but it was fun to see everything. Watching Shamu was really fun. Those animals are amazing. We opted to not sit in the splash zone for fear a little baby might not like the water. It was lots of walking and Carson was a trooper about not complaining about having to walk the entire way.


After Sea World, we decided to have Panda Express for dinner. After we were done, both boys needed to go to the bathroom. Grandma said she would take them. Carson, being older now, doesn't want to have to go in the women's, so since it was a one person bathroom, we told him to go in and just lock the door so no one could get in. Well...bad idea! I was sitting with Landon while everyone was using the bathroom when Travis comes over and says, "Mom, Carson is locked in the bathroom." I just figured he was having a hard time getting it open again. After a few minutes and no Carson and three workers trying to help, my mom calls me over and says they can't get it open and he's freaking out. I went over and got him calmed down as my sister, three workers and I tried to think of ways to get the door open. We tried giggling, banging, having him  wiggle and jiggle the lock, but nothing we did was working. We got all the pins out of the hinges, but couldn't get the door off of them. After over 30 minutes, and no luck, one of the workers called the fire department and told them what was going on. They showed up with a huge crow bar and a sledge hammer and pried the door open. Carson was SO happy to be out! Come to find out...the previous day, a little bit older boy had gotten locked in there for a while but was eventually able to giggle the lock loose. Another person eating there told us that he had witnessed that happening to others before in there! I sure hope they decided to get their locks fixed!