On Monday, I got to go in for my ultrasound, and keeping up the Asay tradition, we found out that we are having another little BOY! We are pretty excited. Christian says that it is impossible for an Asay to produce a girl, and I'm starting to believe it. I guess when ever Michael and Emily decide to have another one we'll see if they can break the pattern. Everything checked out just wonderful...our little guy has all of his necessary organs! It is always so much fun to be able to see the little person growing inside of you. I love ultrasounds. I just wish that the hospital here had one of the cool 3-D machines. My brother's wife has some pretty fun ultrasound pictures of thier daughter that they had done in Powell, Wy on one of those machines. 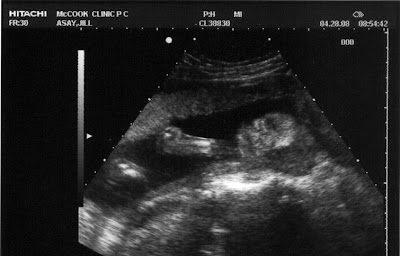 My doctor decided to move my due date back to September 10 instead of the 5th. Not much difference but she decided to go with my calculations than with what the ultrasound was saying. Now it's my task to find a name that isn't already taken by an Asay...there are some many Asay boys...almost all the good names are taken! As long as I don't have to name him Winston (that's what Christian says we need to name him), I'm alright!

Congrats on the new boy! That is so crazy that it is another boy. How funny. Good luck on coming up with a name...you'll have to get creative. ;)

Boys are so much fun! Congratulations! I'm very excited for you guys!

Congrats guys! I say aim for the 8th to have him, that is my birthday. Hey I know these things don't tend to work like that, wishful thinking!!

Yay!!!!!! You can totally see his little face in the ultrasound. SOOOOOOOOOOO exciting. I say pick a name you like and if it's already taken, who cares?? :)

Congratulations!! I am having the same problem of ultrasound and the first day of my last period my difference will only be 5 days earlier. But Congrat to you and your family. My new blog is the same but with 6 instead of 5.