Today was the first day of first grade for Carson. He has been pretty excited about this day...I think mostly so he can see his friends! Yesterday we went and got him registered and he got to go and officially meet (she's actually in our ward at church so he knew her already) his teacher and see his new room. He got to bring his supplies with him inside his new backpack and got to leave them on his hook for today. He loved all the frog decorations in his teacher's room! His teacher took him and Travis out to show them where they would be lining up today when the first bell rang. It's hard to believe that he's in first grade already...I can't believe how fast this summer has gone by! We are sure going to miss him while he is gone to school. Travis is especially going to miss his buddy! We are sure proud of you, Carson. You are a great big brother and friend. You are always smiling and are always in a good mood. You strive to do what is right and are a great example to your younger brothers!

On the first day of first grade, Carson's favorite:
food is pizza,
colors are blue and red,
movie is Spider Man,
song is Dynamite,
thing to do is play with friends,
and he wants to be a police man when he grows up!

Last night, we got together with all of Christian's family at his grandma Asay's house to freeze some sweet corn. The guys picked four coolers full of corn plus a a few more dozen and shucked them all before we got to grandma Asay's house. We were able to go at a really good pace when we had happy babies and everyone could help, but as the babies started to get sadder, we slowed down a bit. Everyone took turns eating tacos and helping. We were able to bag 85 things of corn...enough for each family to have 17 bags! I can't wait to eat it this winter!

Sunday night, my sister, her husband, Jabin and his sister and her husband came to visit for a few days. Monday, we headed to the lake for the afternoon with everyone. After lots of skiing and some A-mazing water, we had to head home and get ready for family pictures that Megan's sister in law, Lyndi were going to  take. Our original plan was to take them by some red rocks, but on the way, she spotted a cool spot by the railroad tracks, so we stopped there too! After we took pictures, we ate some dinner and then dropped the two older boys off at my mom's so they could stay the night with everyone. Tuesday, Christian had meetings all day, so the boys and I headed back out to the lake with everyone. This time, we set our stuff on the beach so the boys could play in the sand (it was really mud) while the others skied. After a while, we took a ride  up the canyon and then headed back to the dock so we could go get ready and have dinner with everyone. It was so fun to have Megan and Jabin here to party with. It always seems like it goes too fast when they are here!

Day one of boating... 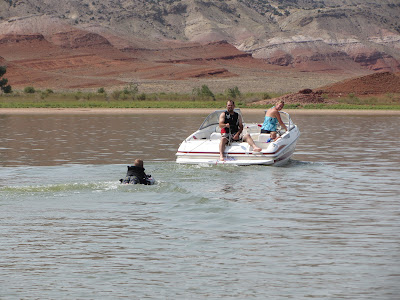 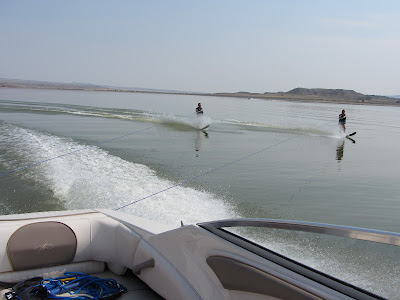 This last weekend, we took a mini vacation into Yellowstone National Park. It had been years since I had been there and Christian couldn't remember the last time he had been there. Early in the summer, we had thought it would be a fun trip to take with the boys and when we won a night stay in West Yellowstone, it was a go! We left Friday morning around ten, ate lunch in the Park, and then drove to Old Faithful. We made a stop at Fishing Bridge, but Old Faithful was our major stop of the day. We got there just about 20 minutes before they predicted it was to go off again, so we had just enough time to use the bathroom and look around the really nice visitor's center. We watched it erupt and then decided to walk around the rest of the geothermal spots. It was fun to see all the different and interesting spots that are around there. After our walk, we grabbed some ice cream and then watched Old Faithful erupt one more time before we left. We drove to West Yellowstone that night where we ate some not so good dinner, walked around the town a bit and then swam off some energy in the pool.

The next morning, we got up and had breakfast and then went across the street from our hotel to the Grizzly and Wolf Discovery Center. They had lots of information about bears and even had some live ones to look at. They also had 7 wolves and a bunch of predatory birds. After there, we walked around the shops some more, grabbed some treats for the ride home, got gas and had some lunch and played at the park before we took off. We decided to take a different rout home and took the Norris rout. We stopped and saw the Artists Paintpots, Upper and Lower Falls which were really cool and kind of made me realize that I might have a fear of heights along with the Sulphur Caldron, which smelled like stinky eggs the boys said and the Mud Volcano. It was a great trip! It was fun to get out and see such a beautiful and interesting place that is so close to us! It's crazy that we haven't visited there more! 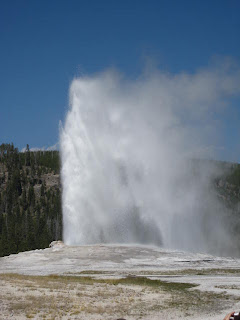 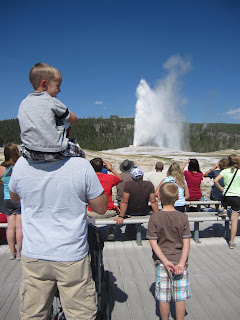 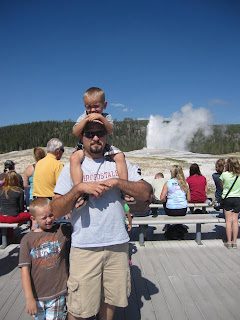 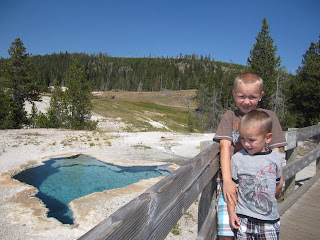 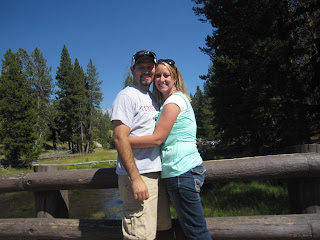 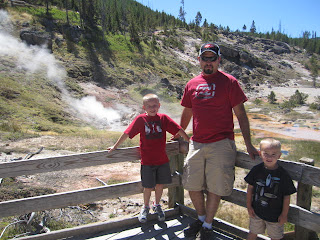