Last Friday night, we had the boys get their pj's on and load up in the car. We didn't tell them where we were going, but we headed to Powell to the drive in to watch Madagascar 3. We made them guess where we were going and they both guessed grandma Foulger's house...which was a good guess since that's the direction we were headed. we arrived and they were pretty excited. We had a good time eating popcorn and watching the movie. It was their first time at the drive in and I think they enjoyed it! 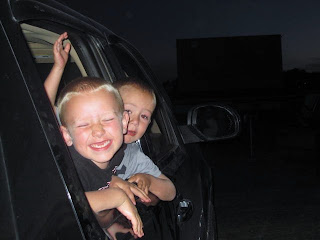