The second day of our trip was full of fun. We woke up that morning and had room service. After we were done with breakfast, we ran to Target to get some treats, drinks and sand toys for our stay. After we were stocked up, we went down to the beach behind our hotel. It was the beach of Mission Bay so there weren't any waves and the water was super warm, which Landon loved. The boys had a great time looking for and collecting seashells. Around 1:30, we headed back to our room to get ready. We had planned to take the boys to Medieval Times (a dinner and jousting/knight show) as a surprise. It started at 6:30 and we wanted to be there about and hour early to look at stuff, so we planned to leave at 3. It's a good thing we did because it took us three hours to less than 100 miles to where the show was at! It was crazy. We got there just in time to use the bathroom, get some swords and shields and get sat down. To say that the boys loved it would be an understatement! They thought it was so awesome and were totally in awe of the knights, their horses and the fighting! They did think it was kind of crazy that we had to eat our dinner (chicken, ribs, potatoes, bread, soup and apple pie) without any utensils! It was so fun to watch them and they have been toting around their new swords and shields since we got home! 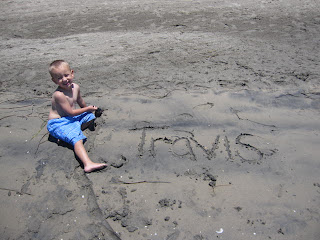 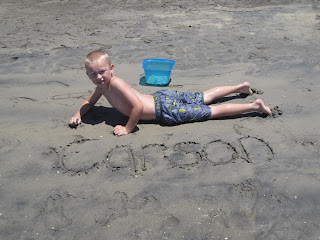 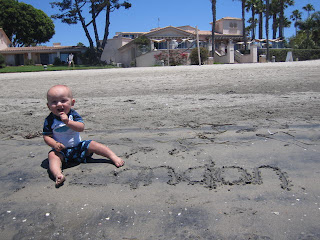 that is insane!! so fun for the boys! btw you ladies sport those knight crowns very nicely!! :)

this looks like so much fun even for me. We might just have to do this one day when britt can enjoy it.

Looks like you had a great time! Your boys are precious.

So glad you guys had a great time on your trip. I am sure the boys loved the medieval times.